Airbus Helicopters’ H160 is a twin-engine helicopter produced by the European manufacturer. Unveiled at the 2015 Heli-Expo, the H160 represents a number of firsts for Airbus Helicopters, including being the first airframe introduced after the change in corporate identity from Eurocopter, as well as the first to incorporate the company’s “new numbering designation.” Improvements made to the airframe include a Fenestron shrouded tail rotor that was described as being the “largest ever,” a Biplane Stabilizer and Blue Edge main rotor blades that increase the payload in comparison to “traditional rotor blades” while, at the same time, reducing external noise levels. The H160 is also the first “fully composite civil helicopter,” the advantages of which include decreased airframe weight and maintenance requirements, while also making it “more robust [and] resistant to corrosion and fatigue.” Subsequent to its unveiling at Heli-Expo, the first prototype H160—which was registered as F-WWOG and powered by two Pratt & Whitney Canada PW210E engines—made its first flight from Airbus Helicopters’ facilities at Marseille Provence Airport on June 13, 2015. Although the first flight was powered by Pratt & Whitney Canada engines, Airbus Helicopters announced in February 2015 that only one engine would be offered, with that engine provided by Safran Helicopter Engines (formerly Turbomeca). The H160 was certified by the European Union Aviation Safety Agency (EASA) on July 1, 2020, with the first delivery being made to Japan’s All Nippon Helicopter (ANH) in December 2021.

According to the EASA type certificate data sheet (TCDS) for the H160—which designates the airframe the H160-B model—it is capable of accommodating up two 14 persons, including the single required pilot, in a cabin that can have an internal volume as high as 257.8 ft.3 When carrying cargo, the TCDS states that the maximum load of the cargo floor is either 661 lb. (300 kg.) or 728 lb. (330 kg.), the latter of which requires the installation of a cargo extension that is optional and “mandatory approved restraint nets.” Although it is certified to seat up to 13 passengers, Airbus Helicopters promotes the H160 as having a slightly lower maximum capacity of 12—three rows of four seats—with that configuration specifically marketed to operators in offshore transportation. For helicopter emergency medical services (HEMS) operators, the H160’s cabin can also be equipped to carry 1-2 stretchers that are arranged “in longitudinal or transversal positions.” When operated by public-sector agencies, Airbus Helicopters promotes the airframe’s cabin as able to accommodate the hardware that is necessary to perform missions such as aerial law enforcement and maritime search and rescue. Additionally, Airbus Corporate Helicopters (ACH) offers a version of the H160 that is configured for business and private aviation that is marketed as the ACH160 and which can accommodate up to 10 passengers.

Take a look at the full AWIN Program Profile of Airbus Helicopters H160.

Pilots operate the H160 by utilizing Airbus Helicopters’ in-house-developed Helionix avionics suite, which on this helicopter features four multifunction displays (MFD) that can show the pilot(s) a variety of information.

Performance limitations of the H160 include a power-on never-exceed airspeed (VNE) of 170-kt. indicated airspeed (KIAS) up to a pressure altitude of 5,000 ft., as well as a flight altitude that can range between -1,500 ft. and 20,000 ft. pressure altitude. Beyond those certified limitations, Airbus Helicopters markets the H160 as having a 138-kt. recommended cruise speed, with a “fast cruise speed” of 155 kt. also possible. When equipped with standard fuel tanks, the H160’s maximum range and maximum endurance are 475 nm and 4 hr. 30 min., respectively.

Aviation Week Network is home to market-leading data and intelligence products. Find out which database is best for your business. 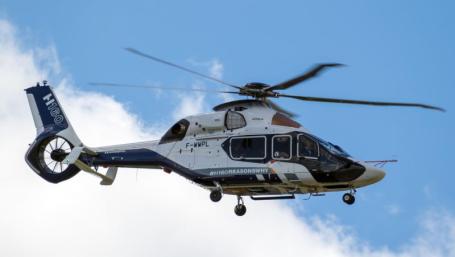 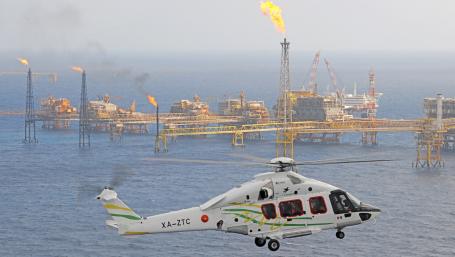